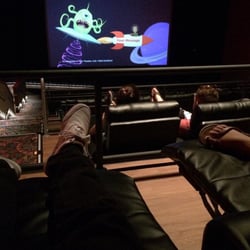 News About This Theater

This upscale multiplex opened on September 27, 2008 on the fourth floor of Anaheim’s Garden Walk shopping complex. It had fourteen screens and an IMAX auditorium as well as a cocktail lounge and VIP screening rooms. CinemaFusion is a division of Sanborn (formerly SoCal) Theaters.