Let me start off by saying that I had a bad experience with an ATI based video card many years ago. I made the switch to NVIDIA and never thought about giving ATI/AMD another chance. When I was offered the Gigabyte Radeon HD 7870 2GB GHz Edition video card for review, I was apprehensive. Gigabyte has a reputation for making great motherboards. I have heard that the AMD Radeon HD graphics cards had become much more stable and that the more well-known manufacturers had increased the quality of the components from when I last tried them, so could my mind be changed to support AMD Radeon cards after a bad experience years ago? It’s hard to say, but I was willing to give it an honest look to see how it would do on my setup.

The Gigabyte HD7870 features three ultra quiet fans with a blade diameter of 76mm (7.6cm), more commonly called 80mm fans, cooling the heatsinks and three 8mm heat pipes. The HD7870 has a black color scheme that should look good in virtually any system. The fan shroud doesn’t have any markings but does have a high gloss finish. This card currently sells for around $189.99 at Newegg under the part number GV-R787OC-2GD. While the sample we received is an OEM white box, purchasing this at retail will not only will you get a pretty box, but a CD with software, two power adapter cables, a Cross-Fire bridge, and a 3 year warranty.

Not much is expected to be on the back of the video card, we can see a few of the mounting screws for the heat sink but nothing else that would get anybody excited. The blue PCB is 9.5″ in length, and should fit in almost every case; however the heatsink extends past the PCB taking the total length necessary for installation to 10.25″. Gigabyte states the dimensions of the card are 42.5mm x 280mm x 134mm(H x L x W). With one CrossFire connection, it’ll support two cards in CrossFire mode.

The top edge of the card has a nice metal support arm that has the Gigabyte name on it; this is a great place for it as it’ll be easily seen once it is installed in the case. On the right edge there are two 6-pin PCI-E power connectors, for the HD7870, Gigabyte recommends a minimum power supply of 500W.

Gigabyte’s Windforce 3x with Triangle Cool technology keeps the card running cool. This system has the fins on the heatsink inclined to reduce air turbulence, and to help with heat. The Triangle Cool technology refers to the combination of angled heatsink fins, and a clip module. Gigabyte says this increases the efficiency of heat dissipation and makes the air flow more efficient. For more information you can check out Gigabyte’s Windforce 3x microsite. 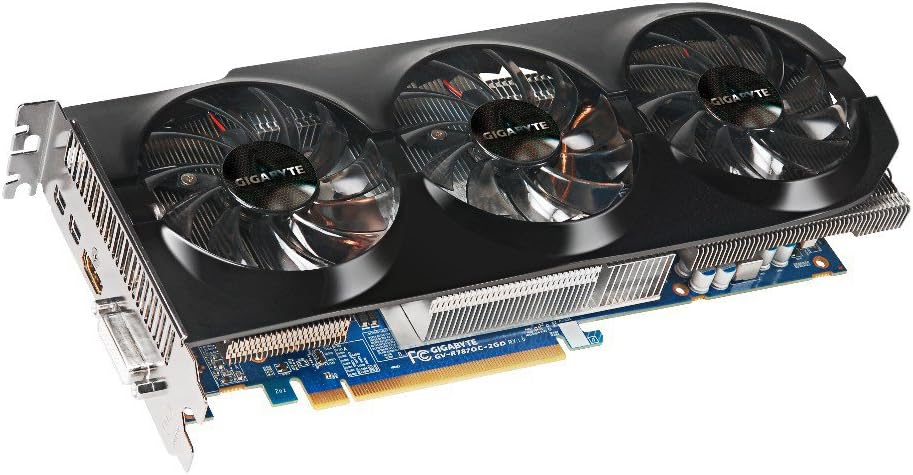 Questions or Comments? View this thread in our forums!