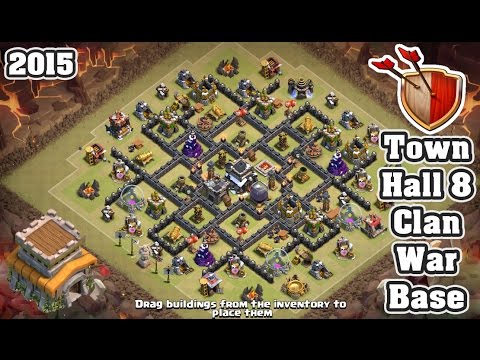 If you’re looking for the New Best Town Hall 8 Hybrid/Trophy TH8 Base Design Layout 2020 in Clash of Clans, then you have come to the right place. This base is one of the best and most popular bases for coc Town Hall 8. This Town Hall 8 coc base layout can be used for Farming loot/resources as well as for Trophy pushing. To know more about this TH8 best coc base, continue reading this post.

Let’s start with the main feature of this base which makes it so effective,These intentional outer openings to some people this might seem as a problem, they would say “oh the base is open, attackers can easily take out those defenses, this base so bad haha lol” but the thing is we could’ve closed those compartments easily as we had some walls leftover, but we decided not to because we are going to use this in our advantage, those openings help us in forcing opponents troops to go where we want them to go.

For example in this clip giants went straight for the cannon because of the opening there we have placed a giant bomb along with some small bombs which will get triggered on giants path to cannon, this forced opponent to use an early heal spell to save his giants, which means now the opponent has to clear the whole base with just two remaining heal spells which is quite hard considering the defensive placements we’ve done, which I will discuss in a bit, 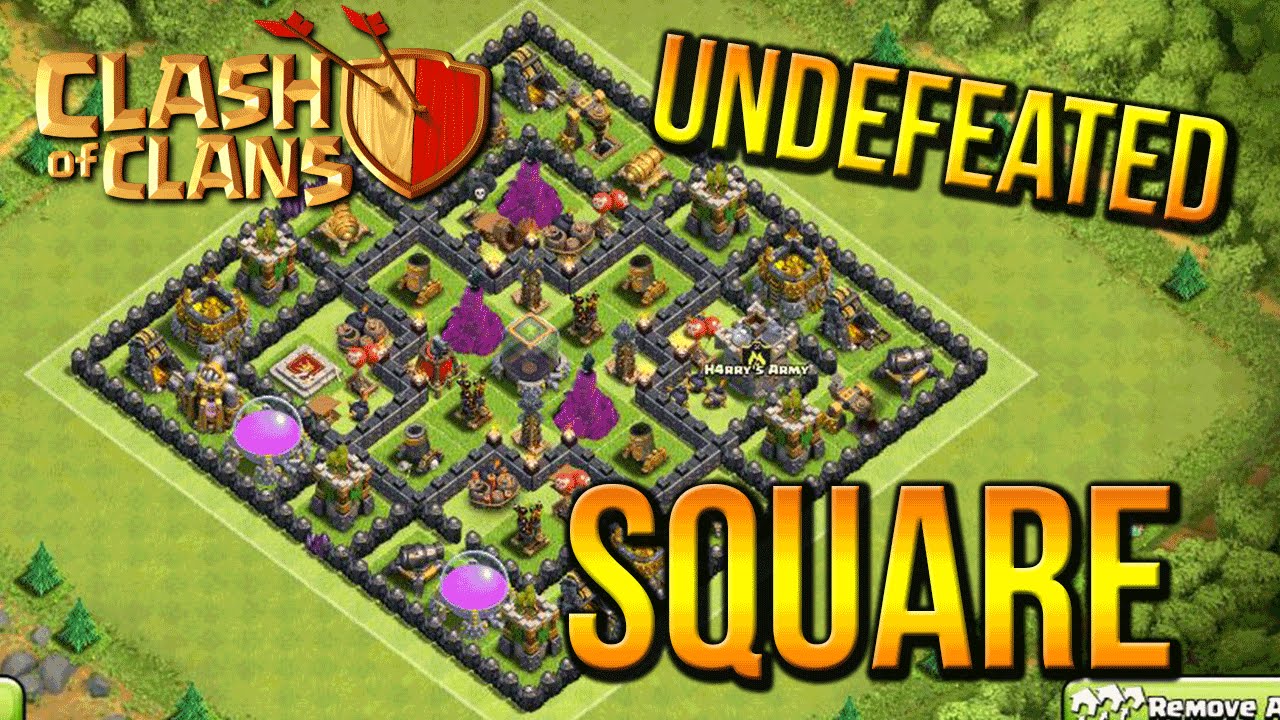 we have created openings on each side of the base so that the opponent can’t avoid these traps, if the attacker attacks from this side, we have placed two spring traps here which will help us in taking out troops worth 28 housing space, same applies to the other two sides, so you can see opponent has to go through at least one of these if the attacker using the farming ground attacks like GeeWe HE, Gee BARCH etc

now some of you might have a doubt what if someone tries to create their own path using wall breakers to avoid the traps, well, yes this indeed is a genuine worry, but i made this base such way its quite hard to make your own path, giants will go for those openings no matter what, one dude tried doing that, you can see what happened with him.
the openings aren’t the only good thing about this base, there is more to it, take a look at the number of compartments we have, there is literally not more than 3 buildings in a single compartment, having so many compartments in a base definitely makes it harder for the opponent because the troops are usually stuck on walls, either they all die out or they run out of time.

Now let’s take a look at other things we have on this base, the town hall is well protected in the center, which is a good thing as we want to save that one star and the loot in it as much as possible.
now coming to the defenses, it is quite hard to make a base that is balanced from all the sides at Townhall 8 because the defense buildings are odd in number, so you have to really plan out where to place the buildings so that no side is left weak to certain types of attacks.

Mortars are placed towards the outer compartments of the base because we want them to protect us against spam attacks like BARCH and mass goblins, but they not only protect the outer buildings of the base, they are placed in such a way that they pretty much cover the whole base,

Air defenses are placed in different compartments in the core with a well-paired air sweeper that makes this base pretty good against air attacks.

Even though this base isn’t really designed for war but you can still try using it wars because of the fact that it defends pretty well against dragon attacks, lemme explain you why, it is pretty well known thing amongst dragon attackers to start their attack behind the air sweeper, so most people would start their attacks from this side, but to make it harder for them we have placed our barbarian king along with multiple high hitpoint storages in the way of dragons so that they have to take them out before reaching to the air defenses,

Plus the clan castle is placed at a distance, so that it doesn’t get triggered instantly, it is supposed to get triggered when the opponents dragons are closest to our air defenses, so that clan castle troops can distract opponent’s dragon while they are in the range of our air defenses, so this side goes out of equation, we have placed high hitpoint storages in front of air defenses on other sides too, which will give them extra protection. but the thing is dragons are way too strong, so no matter what we do, they can get 3 stars if the attacker knows funneling and stuff, but atleast we can do something to stop those who are not skilled enough.

cannons are placed evenly to provide a good balance to the base, so overall you can say, the base is perfectly balanced as all things should be.

coming to traps placements,
although I’ve already discussed why I’ve placed traps in these spots, but I would like to explain the reason why I put those giant bombs and teslas over there, when someone attacks using Giants and wizards what usually happens is that giants go for the defensive buildings while wizards go towards the outer buildings, this is where we can take advantage of this opportunity and take all of them out using a giant bomb, this trick worked for me quite often in the previous builds so I added it in this build too.
the teslas are placed there for the hogs and giants so that it can distract them and make them step on the spring traps closer to them.

Now, coming to the outer buildings you can customize their placements according to your choice or place them just like I did, but make sure you don’t put the same type of collectors altogether, otherwise, the opponent will take all your loot in the collectors easily.

Even though the base itself is strong enough, having troops in your clan castle can help a lot, as clan castle troops will help you in wasting opponents troops and time, so having Valkyrie for normal defenses and dragon for war defense is recommended but if your clan can’t donate you those, anything will do the job.

Using clan castle troops for defending your base is highly recommended as they can put the attacker in trouble by distracting them. Even though the base alone is sufficient to stop most of the attacks used by Town Hall 8 attackers, using the clan castle can help a lot. At Town Hall 8 you can get Maximum of 25 housing space in your clan castle, here are some of my recommendations for CC troops combinations for defense at Town Hall 8 :-

FEATURES OF THIS BASE

Hey Clashers, today we are going to show the best th8 base designs that can defend against various attacks like gowipe, dragon.Before we get into the best town hall 8 clan war bases let us what and how many structure and defensive buildings are available for design .

These strikes were nearly impossible to guard. Super-cell would like to maneuver ahead multi-wave attacking, so having a lot more than 1 troop and also a kill squad. To start with, you want to re design your designs and receive the brand new Air Defenses as so on as you are able to. Below are a few ideas you should use for the brand new base design to allow it to be Anti Dragon.This Base with Committed Air Defenses needs to maintain the covetous attackers off.

Best TH8 Base Anti Everything 2019

It’s time to get a fresh th8 base layout. All latest base layouts I featured here are very popular, therefore they are able to be defeated by a growing number of people. Before I start, I’d love to provide you with a bit of advice. In the event you decide to make use of an online base design they sometimes get highly popular, so people figure out how to take care of and overcome them. It always helps adapt them only a small bit.

Make Sure You accommodate the snare installment following carrying these layouts. Please note, a few layouts are re built with a greater town-hall accounts, but just the guards and buildings out of town-hall 8 designs are all used.

The January Update attracted some tiny changes which have huge consequences for most Clasher’s. In case you are town hall 8, then you are ready to create an additional air-defense and in Town Hall 6, then an third air-defense. This places an end to mass drag on miniature and attacking Healer combos being strong, notably at Clan War. more level 9 layout here.

This town hall 8 base design here instills by funneling troops round the center section with all the city Hall which is well-protected by heaps of cubes. Traveling round the city Hall will surely cost a great deal of time therefore that the attacker will likely come to an end of time when he does not rush a whole lot (what many attackers just do not perform) .

This Town-hall 8 War Base Delivers excellent Anti Dragon protection because of this Air Defenses.
Back in Clan War, it’s pretty popular a high town-hall Level will strike your base. Of course this may be bothersome, however that just happens if a second town hall 8 player is unable to Star your base with those base layouts you’ll provide them a hassle.

This base here instills well from the very ordinary town hall 8 assaulting plans Dragons, Hog Rider and Valkyries. Dragons will not create it throughout the center with All of this Air Defenses, Valkyries can get trapped at the pockets and Hog Riders will operate out of time and can not clean the whole design (leaving the cleanup units insufficient time).

Give this layout a Go, I am Confident You’ll see great results with it ! Crucial recommendation: Here you can discover more farming bases for Town-hall 8. In case you are intending to go to war, then here you Discover the Right military setup and added tips that Will Allow You to get 3 stars at Clan War.

Before you just had three Air Defenses. You might guarantee that somebody who’s attacking with bulk Dragons attracted some Lightning Spells and smashed the own base. With 3 Air Defenses, then you can produce your base very difficult to take down with bulk dragons, with these simple base layouts.

Let us begin with the farming Base Design for th8. If a person intends to strike you together with Giants and Healers, it’s extremely difficult to take the Air Defenses.

Supercell said 2019 which they would like to encourage multi-troop strikes having a multi-attacking platform system. The very first stage is aimed at shooting down guards, and also another point is really for moving to your rest-including town Hall. They love such strikes, and let us face it people will be the only kinds which are art based.

This base here will definitely assist you to push trophies, particularly together with the storage’s externally but take my information to just use this if you’d like to push extremely hard because you’ll eliminate a certain number of resources.

The upgrade is just another measure up super-cell’s desired leadership, and I suppose we’ll have some additional developments in the foreseeable future affects as a way to protect against the mass (one-of-a-kind-troop) assaulting mixes which have tremendous success.