Lyrics to 'Impossible' by Shontelle: I remember years ago, Someone told me I should take Caution when it comes to love, I did, I did And you were strong and I was not, My illusion, my mistake I was careless, I forgot, I did. The song will be released as the lead Us single from the album in Febuary, 2010, and as the second worldwide single later in 2010. It will be sent to U.S. Radio in Febuary, 2010. The music video will be shot at the end of January, and will be released sometime in Febuary. The song was produced by Stargate. Listen/Download: Shontelle – Impossible.

The CDG format (also called CD+G or MP3+G) is suitable for most karaoke machines. It includes an MP3 and synchronized lyrics.

This format is tailored for Windows Media Player which is setup by default on most Windows computers.

This format is suitable for KaraFun Player, a free karaoke software. It allows you to turn on or off the backing vocals, lead vocals, and change the pitch or tempo.

Your purchase allows you to download your video in all of these formats as often as you like.

With backing vocals (with or without vocals in the KFN version)

In the same key as the original: Fm

All files available for download are reproduced tracks, they're not the original music. 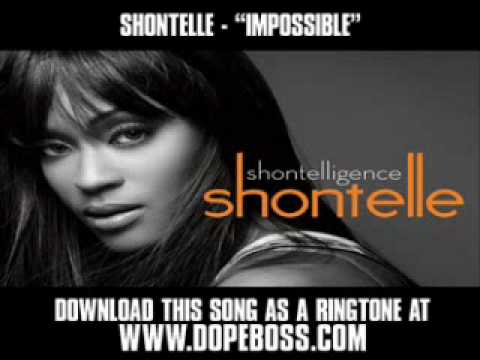 All my scars are open, tell them what I hoped would be
Impossible, impossible
Falling for betrayal is worst

Any reproduction is prohibited

Music Rights are covered by collection societies and publishers. The images are for illustrative purposes only and are not contractual. All musical material is re-recorded and does not use in any form the original music or original vocals or any feature of the original recording.
Without expressed permission, all uses other than home and private use are forbidden. More information...

“Impossible“, is the second single from Barbadian pop/R&B singer,Shontelle‘s upcoming second studio album No Gravity, due for release on April 6, 2010. It is a track produced & written by Arnthor Birgisson with Ina Wroldsen, and was released as the lead US single on February 2, 2010, and as the second worldwide single in June of 2010. A behind the scenes look at the music video for the song was released on March 24 2010, and the official music video premiered on 25th March.