Disclosure: Navigon loaned me a sat nav at no cost for the purpose of this review. I received no payment and was not required to write a positive review.

The Navigon 70 Premium sits almost at the top of Navigon’s range of car sat navs – only the 70 Premium Live and 70 Premium Caravan & Truck models cost more and offer additional functionality.

The 70 Premium boasts a 5″ widescreen and a range of features that qualify it for its range-topping position. Some of the main functions are:

Link Navigon 70 Amazon: http://amzn.to/1acmAsg. Navigon 70/71 Premium Car - DEAD? Hello from Italy, I have a problem with my VW UP Navigon 70/71. I made some mistakes with an update and I erased all the memory. Map management is done with the Map-Manager of the NAVIGON app. This gives you the possibility to download, update or remove maps. Please note: The existing maps are always made available and are based on the time of the app purchase. If you wish to update these, then the one-time purchase of the in-app FreshMaps is necessary.

The 70 Premium looks and feels well made. The chrome trim around the 5″ screen and the mixture of matt and gloss black finish work well and give it a sophisticated and attractive feel. The windscreen mounting feels fairly solid and is easy to fix in place and adjust to the required angle.

I am not a regular sat nav user but I had no problem working out how to use the 70 Premium without resorting to the instruction manual (which is loaded into the sat nav’s memory to be viewed onscreen). The large 5″ screen is fantastic – if you are buying a sat nav, I think it is worth paying for a bigger screen than you get on the cheapest models, even if the extra features don’t interest you.

Entering a destination, choosing a route, setting up the options and using voice navigation should be fairly intuitive for anyone used to using mobile phones and the internet. The Smart Speller function means that only letter combinations that actually exist are highlighted, enabling you to enter a full address suprisingly quickly.

The Voice Command function for entering a new destination is probably worthy of a brief comment. I found this worked well and understood my voice pretty accurately. On experimenting with it, however, we did find that it is quite direction-sensitive – the microphone is on the right-hand side of the unit and when my passenger tried to use it, even leaning forwards, she was not heard correctly until she twisted it around towards her. Clear and correct pronounciation is also important, as you might expect.

I found the screen and the voice instructions very clear and easy to follow. Most of the time I did not bother looking at the screen but could just follow the voice instructions. Thanks to the text-to-speech feature, which reads out street names, the directions from the Navigon were nearly on a level with those that a good human navigator could provide and timing was usually good. 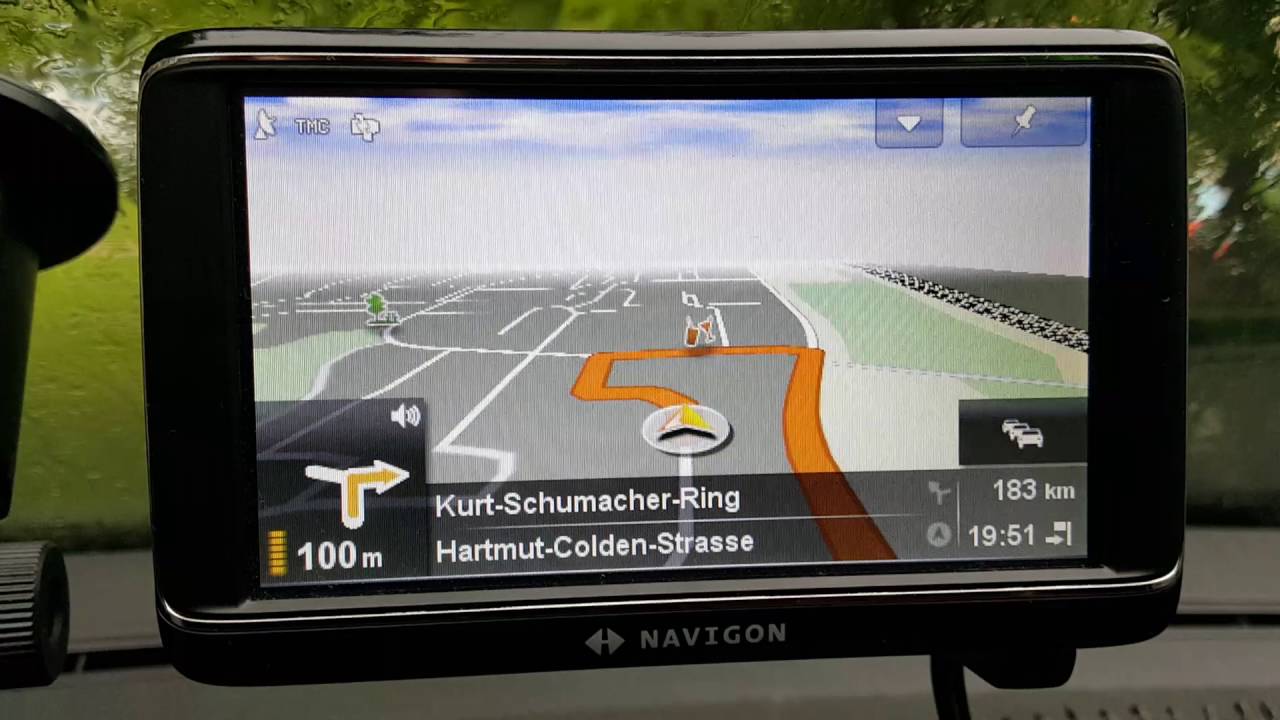 We took in a mixture of town driving and rural roads and also attempted some rerouting, to see how the Navigon would cope. Our first attempt at rerouting took some time, as the 70 Premium came up with ever more cunning routes through residential streets to try to get us back on our original road. However, it did pick up on the new route eventually and at other times was much quicker to reroute. In all cases, the routes were accurate and appropriate.

The 70 Premium uses Navigon’s MyRoutes technology to calculate a route that is “adapted for your personal driving style as well as the time and day of the week.” We were testing the unit on a Saturday and traffic was not an issue, but we did (mostly) prefer the MyRoutes choices over the alternatives.

The onscreen display provides a useful mixture of information, including:

Update 31/01/11: Having now used the Navigon for a 200 mile round trip including several motorways, I’ve had a chance to see Active Lane Assistant and Lane Assistant Pro in action. They work well when you are on a major motorway/dual carriageway, although more guidance as to which lane you should use when on the slip road would be useful.

The Landmark View 3D raised its head as we drove across country – a particularly interesting church popped up on the map in 3D even though our route did not go directly by it. I also saw Day Mode and Night Mode in action – on Sunday morning I left home when it was dark and the screen brightness was automatically lowered to reduce glare. As it got light, the screen got brighter. Useful for early mornings and late nights.

The Speed Assistant feature worked well – the displayed speed limit was accurate at all times on the roads we used (in North Yorkshire) and always updated within a second of changing into a new speed limit. The overspeed warning can be configured to provide alerts at 5, 10 or 15mph over the speed limit (or not at all) and you can choose different settings for built-up areas and out of town. Clever Parking also worked well, correctly identifying nearby public car parking wherever we went.

I did not get a chance to see any of the 3D mapping that is one of the 70 Premium’s special features – we visited Scarborough and Whitby with the Navigon, but neither of them appear to be big enough to qualify for 3D mapping. I’m hoping to visit somewhere larger before I return the review unit, so will update this article if I get to go 3D. 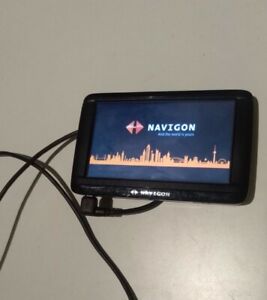 Happily, North Yorkshire has no fixed speed cameras so this piece of functionality did not get tested either. Traffic updates are via TMC – the same information you get on FM car radio. This system uses the charging cable as an aerial, so only works when the charging cable is plugged in. Just as when you listen to the TMC announcements on the radio, it is reasonably timely and accurate but not perfect. You can browse current traffic information via the Options menu and can choose to have an alert appear on the screen or to be automatically rerouted when a traffic delay appears on your route.

The Navigon 70 Premium can connect to two mobile phones at once with Bluetooth – useful for a driver’s business and personal phones. Registering a trusted device was quick and easy and the voice-activated handsfree worked exactly as you would expect, without any fuss. Volume and clarity were okay, although obviously not as good as a system that uses the car’s stereo. 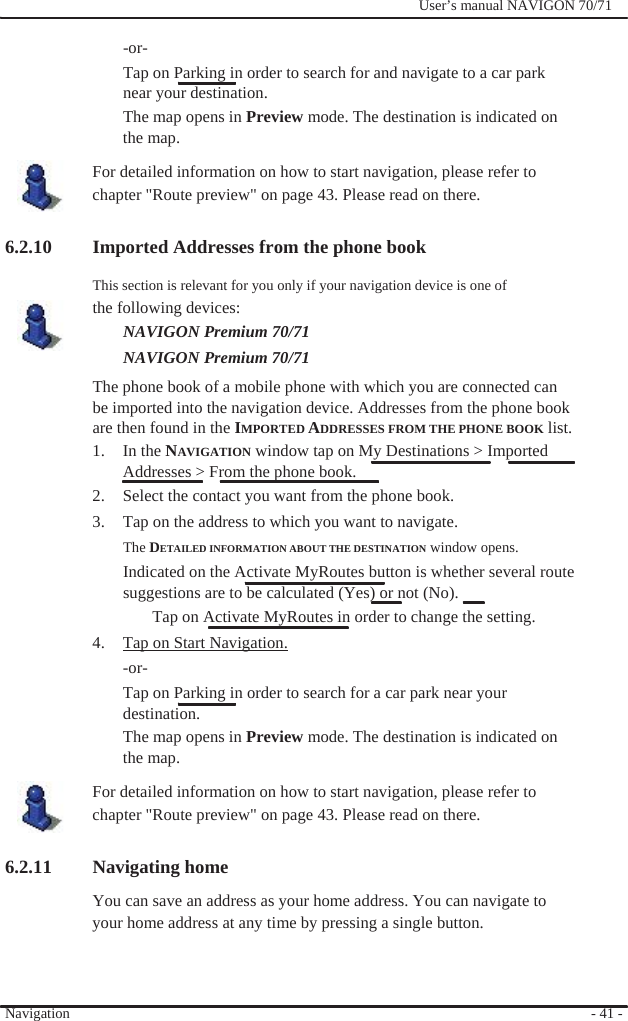 The Navigon 70 Premium costs around £200 at the time of writing. It has plenty of functionality and everything we tried worked well. It looks good and feels well made, the screen is sharp, large and fairly easy to use, and the voice commands work reasonably well. Overall I liked it and quickly felt at home using it.

Drivers of large vehicles can pay another £100 and get the Caravan & Truck version, which offers route planning based on a vehicle’s length, width and height, configured by the user.

German company Navigon has joined TomTom, Garmin and Navman in releasing a 5in portable sat nav. The Navigon 70 Plus GPS represents good value at this price, packing in live traffic, lane guidance and junction view along with its large screen.

The Navigon 70 Plus has a similar design to the company's previous GPS units, particularly the Navigon 6300. The 70 Plus is finished in a combination of glossy matte black plastic with chrome edging, and the piano-black finish on the top and bottom bezel offers a nice contrast to the matte black edges on the left, right and rear. Navigon offers a 24-month warranty on all of its GPS units.

The Navigon 70 comes with a hassle-free window mount. It is a little larger than usual and is basically a chunk of curved plastic with a large, solid clip that helps attach it to the windscreen.

The Navigon 70 Plus GPS unit has a 5in widescreen display that is reasonably responsive. Viewing angles are poor, however; we suggest mounting the 70 Plus as close to direct line of sight as possible. The display doesn't have a very high resolution, but the interface is bright and clear and the screen performs reasonably well in direct sunlight. Like the rest of Navigon's range, the 70 Plus has a dark user interface with orange and white highlights. Although it's simple enough to operate once you familiarise yourself with the menus, it lacks the polish of the interfaces used by competing units, particularly those from TomTom and Garmin. 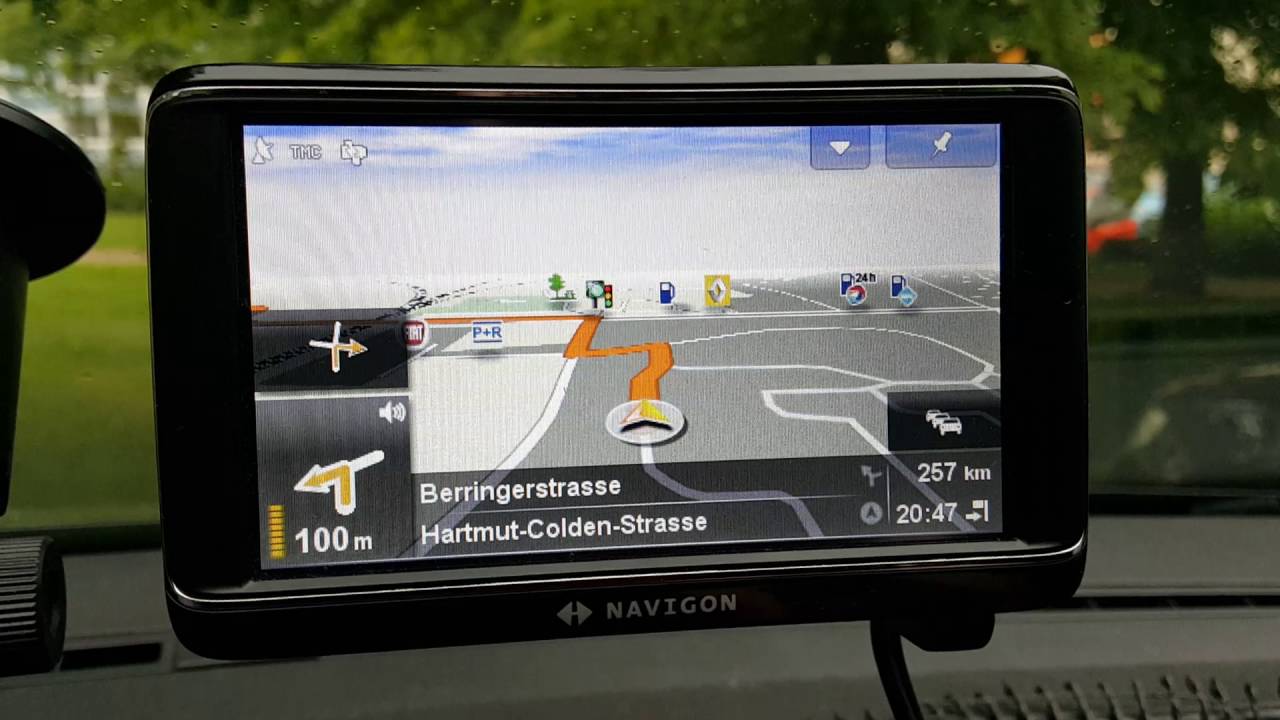 Entering an address is a three-stage process of typing the city, street name and house number using the on-screen keyboard, which can be changed from the standard ABC layout to QWERTY, QWERTZ and AZERTY layouts. When searching for an address you can choose to enter the city or street first and the keyboard is large and clear; search options are narrowed down as you type.

The Navigon interface uses information boxes on the bottom of the map screen. We really like the next turn icons, which are large and easy to see. The text-to-speech voice is loud and clear but can struggle when pronouncing various street names. We found the Navigon 70 Plus a little sluggish to pick up a GPS fix when turned on, but rerouting is fast. The Navigon 70 Plus also includes an integrated 'motion sensor' — move your hand across the face of the display (without touching it) and the unit will bring up the menu panel when you're on the map screen.

Navigon's MyRoutes technology claims to learn from the user's past driving experiences. For example, if certain roads take too long at particular times, MyRoutes will avoid them in the future during those times. The MyRoutes feature is most useful for people who will use the GPS device on a daily basis (such as couriers or taxi drivers). When selecting a route, the Navigon 70 Plus will provide up to three route options with an approximate time for each — one of these is a MyRoutes option, highlighted green. The Navigon 70 Plus includes maps of Australia and New Zealand.

The Navigon 70 Plus also includes Last Mile, allowing you to save the location of your car after parking. When you go to collect your car again, you can navigate on foot in pedestrian mode. This is handy for outdoor car parks, but not so useful in multi-tiered shopping centre car parks, as a GPS signal won't get picked up.

Lane Assistant is a feature that aids the driver when entering and exiting complex motorways and freeways. The lane assistant box displays all available lanes and clearly advises which one you should travel in. We found it very helpful, especially in and around large city roads and motorway junctions.

Also on offer are Reality View Pro, providing easier to comprehend junction views on freeways and motorway exits; Real Road Signs, which displays lifelike road signs on the map screen at various points in your journey; and Landmark View 3D, showing various POIs (points of interest) and landmarks in 3D. The Navigon 70 Plus also has speed and red-light camera alerts, school zone warnings and notifications for bus lanes, accident black spots and railway crossings — all of these are available free out of the box.

The Navigon 70 Plus comes with traffic capabilities and Bluetooth hands-free. The latter works reasonably well, though many callers complained that we sounded distant, even when talking with the windows up in a quiet car. Navigon also provides a free two-year subscription to FreshMaps, which promises new map updates every three months.

Stay up to date with the latest reviews. Sign up to GoodGearGuide’s Gear Daily newsletters