One of the coolest things about the OgreKickstarter was the chance for sponsors to license and create their own counter sheets. The sheets are produced by Steve Jackson Games and are fully compatible with Ogre Designer's Edition.

These sheets are limited in quantity and will not be reprinted. Individual sponsors had exclusive sales right for a year after release, but Uncommon Ogres and ACD sheets are now available through Warehouse 23.

You also get four copies of the Kickstarter edition, your choice of $600 worth of Ogre swag or extras, and naming rights to one Ogre in the Designer's Edition as described for the $200 level. Steve will bring a large stack of party favors (including three of our prototype 3-D Ogres which you can use as prizes), run events, talk about upcoming. In May 2012, a new Designer's Edition of Ogre was funded on Kickstarter.com. The original goal was $20,000 and the final funding was a total of $923,680. As the funding grew, more and more options and upgrades were added, with the final game weighing over 25 pounds (11 kg). Steve Jackson Games.

Released with Ogre Designer's Edition, the Sponsored Counter Sheets are available as a separate purchase, and are not included in any edition of the boxed game.

Barbarians at the Gate

Ogre Designer's Edition Sheets B3 & B4
Sponsored by Drew Metzger

The Vatican Guard captain tucked the loose strand of hair behind her ear yet again. With the sound of her GEV squadron humming outside the command post, she debated how to distribute her dwindling resources. Reinforce Milan and risk losing Turin? Venice was in danger too. Unless things improve, the infidels will soon be driving on Rome! Surely these are dark days to test the faithful . . .

Barbarians at the Gate is an expansion pack for Ogre Designer's Edition.
It consists of four counter sheets with three different factions in the world of Ogre plus a book with the corresponding rules for these counters as well as scenarios. Included in the set are two sheets of Vatican Guard conventional units; two sheets of conventional units representing the 'Sons of Old Nassau' mercenary regiment; and finally, there are four (!) different types of GEV units on the sheets representing the Anarchist Relief Front.

Unique features of this expansion include:

(Note: Buying two of this expansion set would put these forces on essentially equal footing with the Paneuropean and Combine forces included in Ogre: Designer Edition.)

This is a very limited edition expansion set: Only 1,500 sets are available. Order now . . . once they're gone, they are gone!

* For 3-D Ogres in the livery of the Vatican Guard and Sons of Old Nassau, please see the expansion counter sheet Uncommon Ogres.

This Ogre terrain promo pack is a result of the Ogre Kickstarter project, where BoardGameGeek pledged $9,000 for the creation and distribution of two sets of promos, one of which is this terrain promo (the other promo set is BGG 3-D Units, above). Many ideas came from BoardGameGeek users, many others were devised by Steve Jackson, and all were finalized by Steve.

The result is a scenario designer's dream come true, as there is terrain in this set (the log-filled water, for instance) that is not in the rules but is left for the scenario designer. There are also many things that aren't standard Ogre canon. Various pieces are intended to work together. Here are some ideas that Steve Jackson suggests, for example:

Both sheets also have some 'dogleg' shapes for changing streams and ridges.

Following the breakdown of the North American Combine at the end of the Last War, Nihon 'Peacekeeping' forces invaded North and South America in 2101, intent on exploiting the vast resources which Nihon so desperately needed. Following standard doctrine, the Nihon 'Peacekeepers' used captured Combine hardware to supplement their forces. After the death of the Emperor, proper replacements stopped and Combine equipment became the norm in the Western Zone.

The counters on this sheet represent Nihon forces using Combine equipment. While primarily intended to portray the invasion of North America, industrial theft was common and Nihon also had conflicts with Australia (who also used Combine equipment). Players can thus use this sheet for any Nihon campaign.

The counters are designed to form a highly mobile, mechanized force with a large number of GEVs and Marines, ideal for fast strike and amphibious operations. There is also a good defensive mix of Heavy Armor for when the North American city-states counter-attack.

The Nihon Empire's first cybertank, the Steel Oni, was fielded in the Battle of Hong Kong in 2074. Though clearly based on stolen plans of the Combine Mk. III-B, it had numerous improvements. Their later Steel Samurai also had similarities to the Combine Mk. V.

The Ogres on this sheet use standard Combine names and artwork. Players can, however, choose to use them as Onis and Samurais using the stats fromGURPS Ogre(note that the Secondary Batteries have Range 3), as captured and reprogrammed Combine Ogres, or as rogues.

THEY HAVE ALWAYS HATED US.

This product will be a limited edition and no more than several thousand will ever be made. Once they are gone, they are gone. So preorder today to ensure that your Ogre is the mightiest it can be.

This sheet includes an array of strategic and tactical objective buildings, including ports, a seabase, a missile silo, a satellite array, a military headquarters, dome facilities, a rail exchange, a castle, and more. The buildings have a 'damaged/destroyed' reverse side. 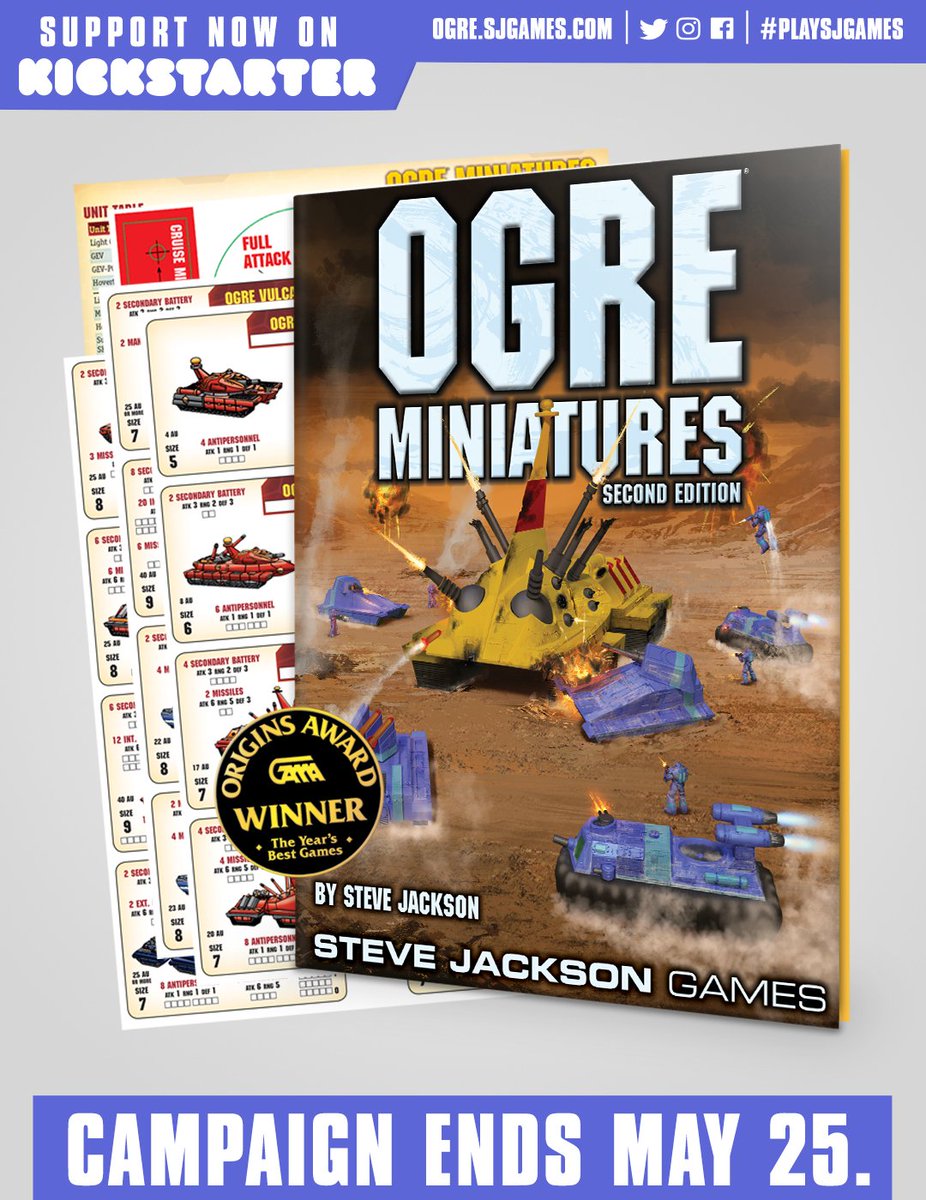 This sheet includes Paneuropean units themed from the classic G.E.V. game. It includes 7 bonus 3-D counters (including Fencer and Fencer-B cybertanks), a 3-D Reactor Building (unit not included in the base box), and more!

This was originally available as a promotional item for ACD's retailers. They occasionally distribute this sheet at conventions, but they do not sell it at retail.

This Ogre unit promo pack is a result of the Ogre Kickstarter project, where BoardGameGeek pledged $9,000 for the creation and distribution of two sets of promos, one of which is this unit promo (the other promo set is a terrain pack, BGG Exclusive Overlays, below). Many ideas came from BoardGameGeek users, many others were devised by Steve Jackson, and all were finalized by Steve.

Here are the unit descriptions straight from Steve Jackson himself!

Looking at the front, left to right, top to bottom: 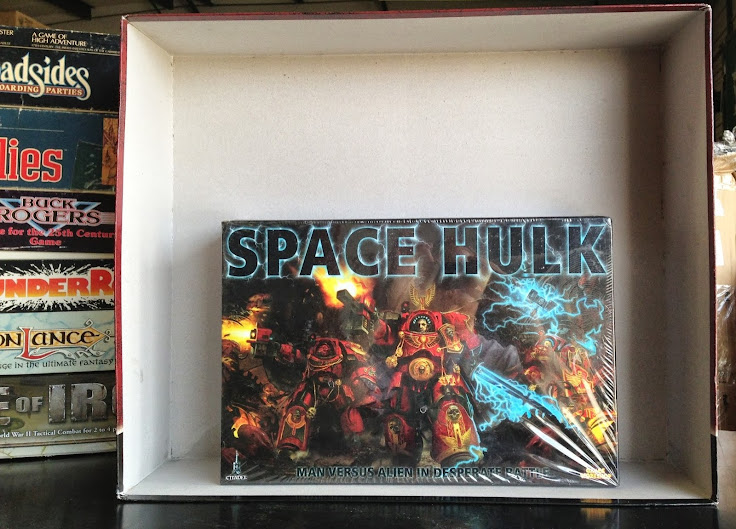 The world of Ogre is the story of the Last War . . . the world war between the Combine, Paneurope, China and Nihon . . . and the time after the death of the empires. The Ogres begin as mindless killing machines spawned in the labs of the Combine, and end as self-aware free agents and mercenaries, the metal warriors who keep the balance of power between the Factory States. In between lies a century of mayhem.

You can enter the world of the Ogres in several different ways:

Available for both PC and Mac.

Posters and, well, other stuff for the Ogre fan.