The RNS-510 is one of the best car multimedia systems. It is manufactured by VDO Continental and used by Volkswagen. It can be connected with numerous different peripheral accesories in VW, Scoda and Seat cars. It has been replaced by Discover Media / Composition Media in 2014.

The latest version J has the following features:

RNS510 Navigation System Overview The RNS510 is the optional Hard Drive-based Navigation System available on Volkswagens from 2009-2015. This unit features a multitude of features, centered on its Hard-Drive Based System and 6.5″ LCD Touchscreen.

Moreover, RNS-510 has the following capabilities:

Drawbacks (Nothing is perfect)

*Old hardware implements a TFT-LCD screen instead of LED.

Radio with RDS and station list of 24 memory slots

DVD playback is not allowed in motion due to safety reasons. However, you can plug in a special cable that enables video in motion or update the software of the RNS-510 using a special CD/DVD.

The screen located in front of the driver - DIS (driver information system) can display useful information such as Radio or Music Information or even GPS data.

You can import Points of Interest using an sd / sdhc card if you have one of the latest software installed. You can download the latest POIs from this website http://index.pois.gr. 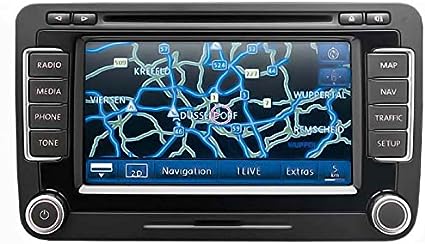 The program poinspect0r can be used to create the necessary file which can be detected by RNS.

The USB and aux- in interfaces are integrated in a separate compartment; this compartment also offers storage space for a smart phone. You can use the RNS-510 to select and play your songs. You can connect an iphone-ipod-ipad or an usb stick in MDI (no iPhone 5 support yet).

There are better graphics and visual representation of the obstacles, while there is a button to disable the sound warning.

An updated firmware version adds new characteristics and feautures and also resolves some problems and bugs of previous versions.

CAUTION: Please use the program Imgburn in order to burn the iso file at 4x speed DVD (+R).

• Larger RVC screen with transparent menus at the side

• Display OPS and RVC at the same time

• Display Off on extras tab

• Clock display if RNS 510 swtiched off

RNS-510 maps are divided into two versions for Europe: East and West. Greece is included at both versions.

Navteq offers an updated maps version once a year.

Valuable information are displayed through test/setup menu if you enable secret menu. This can be done using a Vag-com cable. To enter the test/setup mode when the RNS 510 is operating press and hold the setup button, keep holding it when the radio menu appears and shortly after the test menu appears. You need to reboot the unit after coding it.

Possible problems during / after updating

CAUTION: Do not proceed through the firmware update if you are unsure or if you don't own a vag-com cable.

I own a 2009 Jetta Sportwagon with a RNS 510 Navigation system /CD radio .
The problem I'm having Is that the navigation system isn't recognizing many addresses That The businesses have been established From 50 to 5 years .
So I spent $2000 on a navigation system that will not recognize address is that I input Into it which is a problem !! In particular The address last program in was Tony's on the Pier
210 Fisherman's wharf
Redondo beach
California 90277
My Garmin 660 Which is 8 years old, My wife's 2008 Honda civic,2010 Nissan ,2008 Lexis ,2009 Toyota Camry all of these vehicles With their own navigation systems and my portable Garmin which I keep in my Jetta now for backup all will pull up this address.
Than new Volkswagen Jetta 2010,2011,2012 with my same operating system will not pull Up this address but the 2012 with the new RNS315 Navigation system CD radio combo We'll There's also another Navigation System combo In A upscale Volkswagen with another Type of navigation system With a similar operating system as mine Which we'll pull it up also.
I've had this problem 15 to 20 times now since I've owned the this car And now pretty much fed up with it. Went to 2 different dealerships and they agreed it's a problem Called Volkswagen's customer care and they've been working on this problem for a week.Also gave me many excuses which I told them If you can't fix it refund me the money for my navigation system Or I will lemon law it .
Sorry for the long Story This is very upsetting specially when you spend $2000 for navigation system and you're running a portable navigation system on top your dash .
Anybody else with this problem if so do you still have the address that won't program into your navigation system?
Thanks for your help in advance
David