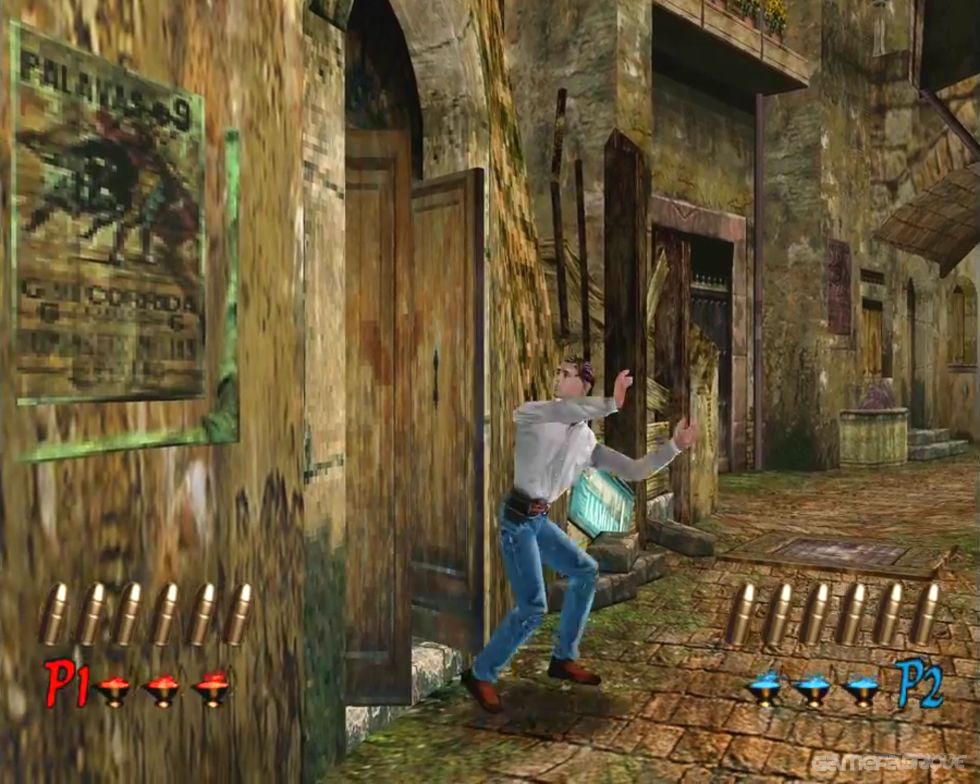 The House of the Dead 2 is a rail shooterlight gun game. It includes an auto-reload feature that allows players to point their guns off-screen to reload their weapons without pulling the trigger. It also incorporates a branching path system that allows players to take a variety of different routes leading to the same point in the game's story.

The game served as the springboard for the arcade, Sega Dreamcast, and PC release The Typing of the Dead, the Nintendo DS release English of the Dead, as well as the inspiration for the Game Boy Advance game, The Pinball of the Dead.

The flashbacks to the first The House of the Dead in the game's introductory sequence were recorded using the game's engine.

AMS Agent G's further investigation on the 1998 Curien Mansion incident leads to his mysterious disappearance upon his discovery of the remnants of Dr. Roy Curien's operations in Venice, Italy, where a zombie outbreak takes place.

On February 26, 2000, American AMS agents James Taylor and Gary Stewart are dispatched, along with Amy Crystal and Harry Harris, to investigate and evacuate the populace of Venice. They suddenly encounter the impish Zeal, who had recently dealt with G. Upon finding a wounded G alive in a local library, James and Gary converse with him and G gives them a field journal showing the bosses and weak points. The pair are then met with a massive undead horde, similar to the kind from the Curien Mansion incident. They continue on, trying to save the town's civilians from the zombies.

During the chaos, James and Gary face Judgment; consisting of Zeal and his giant, headless, axe-wielding armored puppet Kuarl. After killing it, they meet up with Amy and Harry, who split up and try to meet at Sunset Bridge (or the wharf, depending on the player's actions). Upon getting there the group faces off with The Hierophant, an aquatic fishlike humanoid which heads an assault on Venice's waterways and Central Plaza. Upon defeating it, James, Gary, Amy and Harry get on a boat and continue through the rivers.

It is revealed that the zombies were created by Caleb Goldman, the man who funded Doctor Curien in making his creations during the Curien Mansion incident. It is also revealed that Goldman created the new zombies and released them into the city. Goldman leaves a message on Amy's phone, inviting them to meet him at the Colosseum, which Harry fears to be a trap. James and Gary split up again, and face off with a group of serpents known as The Tower. After killing the mother serpent, they receive a phone call for help from Amy, before getting cut off. The two quickly race to the Colosseum only to discover Amy and a wounded Harry, injured by Strength, a giant, chainsaw-wielding zombie which wounds Harry and chases James and Gary throughout the arena. After they kill it, James and Gary push on, while Amy tends to Harry's wounds. They drive over to Goldman's tower, fighting a revived Judgment, the Hierophant, and Tower. 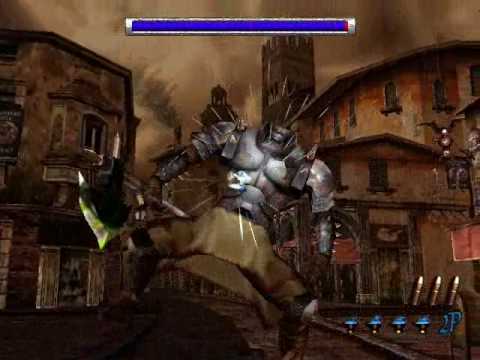 They are confronted by Curien's masterpiece, The Magician, who was also revived by Goldman to oversee the birth of The Emperor, a shapeshifting crystalline entity with mastery over magnetism designed to protect nature from humanity. After they defeat the Magician, they head to the top of the tower to confront the Emperor. In its prototype stage, the Emperor is not as strong as Goldman had hoped, and falls to the AMS agents. In order to evade being arrested, Goldman commits suicide by throwing himself off the roof of his building.

Players are given different endings based on the following conditions:

In the good ending, James and Gary run into Thomas Rogan, the main character from the first game, who tells them that G and Harry are all right, and that they should head off to their next battle 'as long as they have the will to live' (in the case of James) or 'as long as there is an answer' (in the case of Gary). In the normal ending, as James and Gary leave the building, they are greeted by G, Amy and Harry, as well as a large group of civilians, who thank them for their help. In the bad ending, James and Gary run into a zombified Goldman outside the building. As the screen goes white, a gunshot is heard.

In Japan, Game Machine listed The House of the Dead 2 on their January 1, 1999 issue as being the third most-successful dedicated arcade game of the year.[16]

AllGame gave the arcade version a score of four-and-a-half stars out of five.[17] In Japan, Famitsu gave the Dreamcast version 33 out of 40.[5]IGN praised the same console version's detailed level design and varied enemy designs but criticized poor voice acting.[11]GameSpot said of the same console version, 'Just a gun that lines up with the sights doesn't seem too much to ask for.'[9]Game Informer ranked it at number 99 in its best games of all-time list in 2001. The staff praised it for its expansion of its predecessor's gore and intensity, but noted that the lack of a light gun accessory for the Dreamcast version was disappointing.[15]

Blake Fischer reviewed the Dreamcast version of the game for Next Generation, rating it two stars out of five, and stated that 'Without the light gun, this game is a complete loss. With a gun, it's better, but not for very long.'[14]

A consensus among reviewers was that the quality of the English voice acting was very poor, with one calling it 'easily some of the worst in the genre'.[2] Others found it to be so bad that it became amusing.[18][19]

We're really sorry for the inconvenience, but please would you disable your ad-blocker? Our adverts are relevant and non-intrusive, they appear only at the top and the sides, never in the content. They don't include auto-playing audio either, they really won't spoil your enjoyment of the site. Thank you in advance!

Want to see this appeal go away forever? Support us on Patreon and we'll make that happen! Click the button on the left to find out more. Miktex mac download.

'I'm not running an ad-blocker!' -Refresh/reload the page, if you still see the panda or have other problems then click here to contact us immediately, thanks.

'Why are you doing this?' - Frankly we're struggling to make ends meet here especially since the site got more popular. The only way we can think to cover our costs is to run ads, but if so many of you keep blocking them..

'But I never click ads!' - Doesn't matter, you should only click them if they interest you. We get paid based on the number of views AND the number of clicks.

Another fact - We have the software and the power to completely block adblock users from our site, but we're not going to, at least for now. We figure most of you would like to support us and you only installed Adblock because of other sites that aren't so considerate with their ad placement. Please, don't punish us because of them, in the seven or so years I've been a blogger/webmaster I've ALWAYS considered the need to balance monetisation with reader experience. I want to build an audience not send them away.

Smith campus lies adjacent to the larger campus of the. Eo smith drivers ed. Smith, as participants in the school's Agriculture Education program, if their school does not offer an agriculture program. Smith High School was established in 1958 as a regional school to serve the towns of Ashford and Mansfield. Originally part of the University of Connecticut campus, owned by the state, and operated by the university, it has been operated as a regional public school since 1987.

So go on, whitelist us and any other site you love. If it wasn't for ads, the internet would lose a whole chunk of really great niche content like this, which would be a real shame in our opinion.

Now, go ahead and read the page if you want to, but wouldn't it be much more convenient if you just whitelisted us? :)

The House Of The Dead 2 Ost

Some videogames may have huge budgets, motion capture stunt-men and top voice actors, but it is often the ones that don’t that end up being all the more memorable for it. Anyone who played through the original Resident Evil will fondly remember the terrible voice acting in that game. Sega’s House of the Dead 2 has a similar low-budget script and hammy acting. The game casts you as either James Taylor or Gary Stewart, agents in the mysterious AMS organisation, who are called upon to investigate a zombie outbreak. The game also introduces Goldman as the main antagonist, he’s the head of one of the most eminent financial groups and an expert on the genome theory. Thanks to a barely B-movie grade script and very wooden acting, Goldman remains my favourite video game villain of all time.

Originally released in the arcades, the game was eventually ported to the Sega Dreamcast console, along with a re-release on the Wii several years later, and of course, it came to the Windows PC.

Dogs of the AMS, time they made a move

To begin your fight against the evil Goldman, simply place the CD-ROM into your computers optical drive and follow the on-screen prompts. If the games autorun window doesn’t appear automatically, browse to the CD in Computer/This PC and run the “Autorun.EXE” file manually. Do not install DirectX from the CD as the version on the CD is somewhat out of date.

On our Windows 10 PC, the installer did not create any shortcuts on our Start menu, so you may need to do this manually. See this tutorial if you need help with this. You will want to create two shortcuts, one for the game itself (Hod2.exe) and another for the configuration tool (Config.exe).

Once the game is installed, start the configuration utility by running the “Config.exe” program. Here are the extensive options the game supports.

As you can see, there are no graphics or sound settings that we can configure at all. The game is regrettably fixed to a 640×480 resolution. Note that the game doesn’t support using two mice either, meaning that if you want to play in co-op, one of you will be limited to gamepad or keyboard controls. Some users have reported that it is possible to use two AimTrack light guns, however. The PC version also has a unique network mode that should allow for online or LAN play, regrettably we weren’t able to get it to work in our brief tests.

Once you have configured the controls, start the game by running the “Hod2.exe” program from within the games directory. The game should run without any difficulties.

Only man himself can control his fate

Regrettably there doesn’t seem to be any way to run House of the Dead 2 in any resolution other than 640×480. You can however, use the dgVoodoo2 package to add a little more functionality to the game. While this won’t enhance the graphics, it does make the game compatible with tools like Nvidia Shadowplay or Evolve.

Game does not respond to input – If you have an Xbox One controller attached to the PC, then for some reason the game will not respond to any keyboard or mouse input. This happens regardless of if game controller is selected as an input device or not. We have absolutely no idea why this is. There is no problem with the original Xbox 360 controller.