Are you looking for some good alternatives to replace the Xampp server on your Windows 10/8/7 operating system? Then here are some similar options you can use to create a local web server on Windows, Linux, or macOS.

Xampp is an open-source program that we can install on Windows, macOS, and Linux to use Apache, MariaDB, PHP, and Perl. Most of the users use Xampp to test various kinds of apps, websites, CMS such as WordPress that require a LAMP web server environment. Thus, no need to use virtual machines or Linux systems. However, Xampp is not alone in the online software world that is providing such local web development and database management features, there are few others with more or less equal features such as WampServer.

Let’s have a look at the software that we can use to replace the XAMPP server.

The programs listed here are free and can be downloaded using the links given after the description of each software for creating a web server environment based on LAMP.

The first XAMPP similar software is WAMP Server; if you are a programmer or blogger who wants to test out some website or web-based app, the WAMP is one of the best alternatives to XAMPP. It is easy to use and comes with Apache, MySQL, PHP, phpMyAdmin, Adminer, and PhpSysInfo. This makes it a convincible pre-packed stack of LAMP server to easily perform PHP and other web development tasks. Every script can be tested not only in all conceivable PHP versions but also in the various Apache and MySQL versions.

It can be downloaded from the official page of the WAMP. However, unlike XAMPP, it is only limited to Windows such as Windows 10,8,7… WAMP comes control panel that is used to start and stop services of running server applications such as Apache, PHP, and MySQL. This makes it quite a user friendly.

Furthermore, if you are looking for a WAMP server for macOS, then also sorry, it is only available for Microsoft Windows to download in both 32-bit and 64-bit. However, the user can download the WAMP portable in the form of the EasyPHP or UwAmp package given in this list. 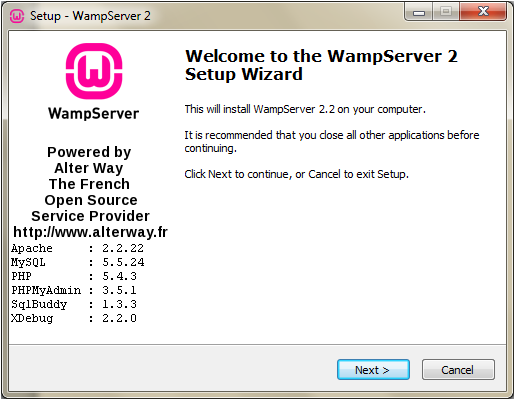 Next, a popular alternative to XAMPP is MAMP. It is also a free tool to set up a local web server environment on Windows 10/8/7 or macOS machines in few steps. MAMP stands for Mac, Apache, MySQL, PHP. It can be easily downloaded from the Apple store as well.

MAMP can install Apache web server, MySQL, PHP, Python, and Perl without changing any settings for testing WordPress and other popular web applications on Desktop PC. Furthermore, like other XAMPP or WAMP, this one is also not going to affect the other web server environment already on your local PC or desktop, it doesn’t matter it is Apache or Nginx.

For Windows, it also offers a paid version that meant to target professionals with better frontend and the ability to create a separate host for each project.

If you looking for a single best package with XAMPP, WAMP, and MAMP functionalities that can quickly build a local web server environment to test out various web applications including WordPress, then try out AMMPS. It is a complete software package available for Linux, macOS, and Windows. It enables users to use Apache, Mysql, MongoDB, PHP, Perl, Python including one extra package that is Softaculous, that usually available on hosting cPanel to quickly install web applications.

Thus, if you are using AMPPS then there would be no hassle in testing out websites or any other project. For example, you wouldn’t need to install WordPress manually, with one click it can be set up using the Sofaculous auto-installer for Desktop. It has over 420 apps to install.

PhpMyAdmin and SQLite are also there. Furthermore, the complex tasks of the backing of the database or entire website project on AMMP can be done with the help of just one click.

The EasyPHP option is for those who are looking for a portable alternative to XAMPP or WAMP server. The EasyPHP developers offer a package called Devserver that allows us to set up a local web server on Windows 7/8/10 operating system. The biggest benefit of using DevServer is its portability feature, one can download and save it in an External Drive or USB or Memory stick to start working on his project on Windows running systems. Like other best local Web Server creator tools mentioned in this XAMPP alternative list, this one is also allowed to access files and folders directly along with the ability to start, stop, and restart the servers with one click.

PHP, Apache, MySQL, Nginx are its main components whereas the developers are also planning to bring PostgreSQL and MongoDB support to DevServer. Apart from it, they also offer other tools called a Web server, that allows users to create a Web hosting environment directly on a PC or laptop.

If your main purpose of setting up a local web server is testing out WordPress based websites on Windows, then best to try out Desktop Server. It allows to set up local installation WordPress in just a few click with SSL support. It is a fully optimized LAMP stack for running WordPress instance. However, it is not only limited to Windows but also available for macOS. There are few nice features that are only available in the premium version of DesktopServer that are; ability to install multiple WordPress instances, Full CLI support, Support for DreamWeaver, and more.

Yes, this one is a lightweight portable application that comes in zipped format. Just extract the files in a USB drive or on Desktop/Laptop double, open the folder, double click on the setup, and our Apache web server along with MySQL & PHP is ready to use. That means you will get the local web server environment without installing anything on the Windows PC or Server at all.

The interface is quite user-friendly and easy to understand. Quick options to start and stop Apache server including changing of PHP and MySQL versions. One-click access to PHPMyAdmin, SQL Lite, and browsing of the website are also there.

Are you in need of a web server software for your projects? Looking for something with outstanding performance that suits your prerequisites? A web server is a software program which serves content (HTML documents, images, and other web resources) using the HTTP protocol. It will support both static content and dynamic content. Check these eight top rated web server software and get to know about all its key features here before deciding which would suit your project.

The Apache HTTP web Server Project is a push to create and keep up an open-source HTTP server for current working frameworks including UNIX and Windows. The objective of this anticipate is to give a safe, effective and extensible server that gives HTTP administrations in a state of harmony with the present HTTP benchmarks.

The Virgo Web Server is the runtime segment of the Virgo Runtime Environment. It is a lightweight, measured, OSGi-based runtime that gives a complete bundled answer for creating, sending, and overseeing venture applications. By utilizing a few best-of-breed advances and enhancing them, the VWS offers a convincing answer for creating and convey endeavor applications.

Abyss Web Server empowers you to have your Web destinations on your PC. It bolsters secure SSL/TLS associations (HTTPS) and in addition an extensive variety of Web innovations. It can likewise run progressed PHP, Perl, Python, ASP, ASP.NET, and Ruby on Rails Web applications which can be sponsored by databases, for example, MySQL, SQLite, MS SQL Server, MS Access, or Oracle.

All the arrangement is done through Cherokee-Admin, an excellent and effective web interface. Cherokee underpins the most across the board Web innovations: FastCGI, SCGI, PHP, uWSGI, SSI, CGI, LDAP, TLS/SSL, HTTP proxying, video gushing, the content storing, activity forming, and so on. It underpins cross Platform and keeps running on Linux, Mac OS X, and then some more.

RaidenHTTPD is a completely included web server programming for Windows stage. It’s intended for everyone, whether novice or master, who needs to have an intuitive web page running inside minutes. With RaidenHTTPD, everybody can be a web page performer starting now and into the foreseeable future! Having a web page made with RaidenHTTPD, you won’t be surprised to see a great many guests to your web website consistently or considerably more

KF Web Server is a free HTTP Server that can have a boundless number of websites. Its little size, low framework necessities, and simple organization settle on it the ideal decision for both expert and beginner web designers alike.

Tornado is a Python web structure and offbeat systems administration library, initially created at FriendFeed. By utilizing non-blocking system I/O, Tornado can scale to a huge number of open associations, making it perfect for long surveying, WebSockets, and different applications that require a seemingly perpetual association with every client.

This is the most mainstream web server amongst all the others. WampServer is a Windows web improvement environment. It permits you to make web applications with Apache2, PHP, and a MySQL database. Nearby, PhpMyAdmin permits you to oversee effortlessly your databases. WampServer is accessible for nothing (under GPML permit) in two particular adaptations that is, 32 and 64 bits.

What is a Web Server?

A Web Server is a PC framework that works by means of HTTP, the system used to disseminate data on the Web. The term can refer to the framework, or to any product particularly that acknowledges and administers the HTTP requests. A web server, in some cases, called an HTTP server or application server is a system that serves content utilizing the HTTP convention. You can also see Log Analyser Software

This substance is often as HTML reports, pictures, and other web assets, however, can incorporate any kind of record. The substance served by the web server can be prior known as a static substance or created on the fly that is alterable content. In a request to be viewed as a web server, an application must actualize the HTTP convention. Applications based on top of web servers. You can also see Proxy Server Software

Therefore, these 8 web servers are very powerful and makes the customer really satisfactory when used in their applications. Try them out and have fun programming!